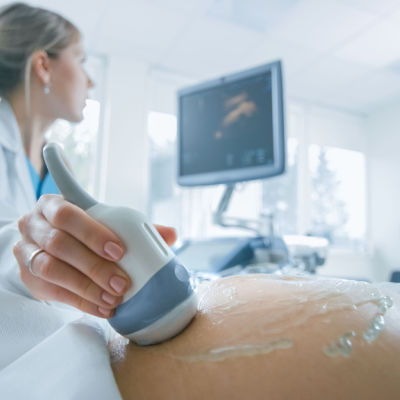 Prenatal ultrasounds are a common part of a new mother’s prenatal testing. Using high­-frequency sound waves, ultrasounds produce images of a fetus and the mother's reproductive organs. These sessions, which are usually performed in a doctor's office, track fetal growth and development and monitor for any ongoing problems.

Standard ultrasounds are two-dimensional. A water-­based gel is applied directly to the mother's abdomen, and a wand also called a transducer, will be maneuvered around the area. Transvaginal ultrasounds may also be used, in which a smaller transducer is placed inside the vaginal canal.

The images being captured will then be shown on a screen in black­-and­-white. These are used from the very beginning of pregnancy to confirm the gestational age and size of the fetus, monitor the fetal heartbeat, examine the mother's reproductive system, and diagnose any abnormalities. Doctors may also use ultrasounds to guide them as they perform other tests, such as amniocentesis (an analysis of the amniotic fluid).

Ultrasounds are usually performed as part of screening or medically recommended testing, and should not be performed solely to reveal the sex of the fetus. Doctors also do not recommend ‘souvenir’ ultrasounds, as these might pose as-­yet unknown risks for the fetus.